“Even Saturn’s Virtues
are dreary.  And its vices are
particularly unpleasant. Because they
operate through the emotion we call fear.”

“You left the Bay Area for…Boulder?”  I watched a regiment of long-suited joggers file down mall after a rally at Frank Shorter Sports, forerunners of the valley’s endorphin revolution. “Happened to take a little trip to Frisco myself, over Thanksgiving.  Seemed pretty big time…sort of like the mother lode of raw empirical data.”

“Big-time hassles.  I was closing in on the big 3-0, and things were closing in on me,”  Paul Verniere pulled down his Aviators, wiping clean the chrome lenses.  He then swept his arm around toward the campus and sloping winter peaks back-dropping every artery and building in between.  “Don’t call it Frisco, and don’t kid yourself.  Boulder is Walden Pond compared to there. The people and…hell, just open your eyes, man.”

Other than a sprinkling of grizzled Pearl Street mainstays, only the banks and brickface remained.  Frontier storefronts still bore pioneer nameplates the likes of Boettcher, 1878 and Browning, 1890—but everything else on the mall was yesterday’s news.  Walls had been sand blasted, wood beams stripped and exposed.  Designer jeans and leather basked in display cases once saddled with tack and rodeo wear, common housewares had upscaled into track-lit earthly goods.

A Pearl Street where hot, dust-spitting Jimmies and Power Wagons once went axle to straight axle for cruising rights had by now been feasibility studied, climate compensated, traffic diverted, pedestrian engineered, cluster illuminated, environmentally integrated, energy efficiencied and assessed to the hilt—then swarmed over by come-latelys too new to know any different. 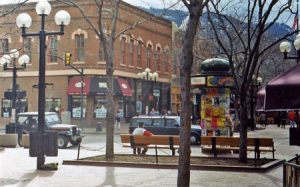 “C’mon, Everybody’s Favorite City?”  I was taken aback by Verniere’s candor, fixing to toss back a major slug of Lucky Lager.  “It seemed so worldly and incredibly alive.  I mean sometimes Boulder makes me a little stir crazy.”

“Listen, San Francisco can make you certifiably crazy these days…I’m dead serious,” he spoke through another, more modest splash of Grenache, wringing the stem of his glass.  “One man’s scenic romper room is another man’s rubber room with a view, 49 miles square.  Trust me, it can really bite you, can suck you into situations way beyond your control.”

“Bite…suck?  Jeez, I can see captivating maybe, but…”

“Besides, you’ve got it socked here, right?  Great dog, righteous ol’ lady, happening little dream house up on The Hill.  Me, I’m stuck out there in flatsville valley, overlooking the picturesque Crossroads loading docks.”

“Aw, you’ll work your way up there eventually.  Housing’s a right of passage in this town,” I swallowed, over the roar of a snowblower casting the last slushing drifts aside. “We started out by 28th Street, too…uh, how did you know about…”

“What can I say?   Guess it’s the outgoing Franco-dago in me.  Must have been at the department’s Christmas party, remember?  You brought your…wife…Melissa, is it?  Such a nice gal, of the Hebrew persuasion?  She told me all…

“Moon, my…housemate.  I forgot…and the Hebrew thing I can’t say much about.  I mean, it hardy ever comes up.”

“Forgot?  Maybe you were too busy hitting on Grammersly…”

“The hell…”   What…stuck, I thought, flitter glancing his way.  What hassles, what situations?  What Hebrew persuasion?  Something about this guy didn’t jibe.  He was a little too open, a little too closed–a little too needy, a little too set–a little too youthful, a little too old.  In some untoward way, I wanted to hear more about Paul Verniere, I just didn’t want to hear it from him.  Why Sosh?  Why here?  Why was this guy reading Camus and Dos Passos, when he could have been hung up on Garp and Castenada like everybody else around town?  And what was he hiding in all those damn pockets?   “Anyway, nothing’s socked now that my program’s over.  Cross and Terrent were really noncommittal about my doctoral acceptance.  How did they put it?  ‘No such determinations had yet been made regarding any of our candidates.’  Just before Grammersly came up with her ‘extinguish’ crack.  This is so totally out of nowhere, I don’t even begin to know what’s next.  God forbid—downtown Denver—maybe some internship or miserable counseling center.”

“Wow, actually go out and take on the ills of society.  What a methodology…”

Across Broadway, long, lazy wooden benches stretched sidewalk-to-sidewalk, hedge rowing a half-block of barren flowerbeds and saplings smack down center mall, where dueling traffic used to be.  It was now prime resting ground for the over studious undergrads and understudied laggards soaking in the cabin fever-breaking mood of the day.  Kick back and explore the people exploring the gran criterion bike shop, organic bakery/smoothies bar, the sheepskin fleecers and synthetic jazz clubs.

Everybody high and trail-mixed and colorfully down filled, spacewalking along the snowy mountain background, reaching a dreamy state of happathy, seeking out mythical Morkins behind every young Green Ash and Linden tree—as if such creatures ever actually landed east of Studio City, California.  Still, I found myself pining for old shitkicking, pool-shooting Art ‘n’ Arnie’s up there on the corner—a cowboy dive any tenderfoot could get himself honorably snookered in—before some Chicago pizza franchise booted their rowdy asses up to Nederland and Ward.

“Anyway, without the Ph.D. program, there’s nothing much around here for me,” I added, before downing my Lucky in earnest.  “It’s like teaching…get your credentials and work construction.  I didn’t sweat out a master’s to nail tarpaper.”

“Aww, hang in there, it’s well worth the wait.  My mother’s always told me a good education can buy you things, or freedom from things.”  An upstart breeze must have stirred my essence, prompting him to back an arm’s length from the table.  “Although I must say it makes me glad I’m locked in for this fall.”

“Got that right…wait a minute, I thought you’re graduating this spring…”

“How the hell can you have a lock on that?  Nobody…”

“Grammersly told me so, at the Christmas party…she said she’d already discussed it with Cross.”

“No way,” I spouted, snatching my Lucky bottle.  “Just this morning they said…”

“Who knows,” Verniere asked, with a sweep of his arm.  “Maybe you should have been hitting on her…”

“Oh, right.  Next you’ll be telling me they’ve already granted you an assistantship.” I nervously drained my longneck brew.

“Don’t need it,” he smiled, shaking out his cutback curly black hair, a serpentine ring setting glistening in the sun.  “A little granny family trust is there so long as I use if for self improvement. My job’s the GPA…ready for another suds there?”

“Uh, no thanks,” I pushed my bottle away, barely stifling the ire.  Hmph, another damn trust buster.  “Well, that’s just great for you…terrific…”

“Yessir, fresh new intellectual horizons—besides, gotta stay here in mountopia, nested with all the adoring young chickadoos, right?  Honestly, if Roman Polanski can jake it and skate,”  Verdiere beckoned the waitress, who had patrolled their corner like a minesweeper since the opening round.  “Mellow out, Herbert, I’ll get two more going here.”

“No, really—I’d better go…got some errands,” I compared my timing to Boulder Bank’s pedestal clock.  Either it was striking at twenty after the hour, or this little reality check was all of a sudden compression ringing, ear to ear.

“I hear you,” he replied quizzically, gently tapping the waitress’s hipbone as she squeezed between tables, full tray.  “Listen, we’ll do this again real soon, hey?  Maybe you can fill me in on the orals portion while it’s still fresh.  I mean, did they cover Path Analysis or Epistemological Curvilinearity, or…you know.  I’ve got it coming up in June, and all…and you are the teachers’ pet rock, aren’t you?”

“In my dreams.  But I really don’t hang out much on Pearl Street anymore…”  I rose, striving to keep civil distance from the Margarita party one table down.  No such luck.  My cavalier wave caught that pivoting waitress squarely across her Golden Buffaloes, which sent her tray sailing, gimlets, and all.  More startled than she, I centrifugally crashed the neighboring party, specifically their refilled pitcher.

“Hey, real smooth, jerk-off!”  A McKyle’s’ regular of ranch-hand proportions rose like a Trident missile launcher, glaring at me, blotting Margarita from his butterscotch leather sport coat with the overhang of a white linen tablecloth.

“Sorry…aww Christ…”  I dabbed his shoulder with some Kahlua cocktail napkins.

“Suit yourself, Herbert,” snapped Verniere, backing his chair further away from all the drips.  “Whew, where have you been, anyway?!”

“My goddamn dog,” I muttered, righting stemware, helping the waitress apply more napkin compresses to the frosted party of four.

“A long story…guess it’s the tipsy Scotcho-mick in me.”  I sponged at my own checkered plaid flannel and jeans, then vaulted over McKyle’s’ wall into the path of a custodial crew changing clustered glass-globed streetlights.  “Uh, sorry… Hey, catch you later, Paul, OK?  And thanks for the brew.”

“Sure, Herbert, sorry about that,” Venire sneered, waving his right, jade-ringed hand—narrow, porous face nay shaking behind those cold, reflective shades.  “CU down the road…”

Chapter 3. An angry acknowledgement,
then a bloody Sisyphean ride home.