“The influence of Saturn is
the most lasting and malignant of
all planets.  Mars may be compared to a
fever…while Saturn resembles a consumption.”

“Well, some don’t hardly know it.  Others don’t know what hit them.  But the fact is it happens to everybody, boy…and I do mean everybody.  Here we’re going on 1978, and you act like you don’t have a clue what some people go through when they close in on 29, much less 58…or, god forbid, 87. This I know, believe you me.”

Hers was no mere primal universe. I’d come across the place via a red handbill slipped under my windshield wiper; then some spangled hippie gal named Cara pointed the way. Down on the street festered the bawdy neon signs, the gutteral tattersall barkers hawking touchy-feely parlors and sado-bondo shows.  But one flight up, the pleasures were spiritual, celestial. Festooned like so many tattooed anchors around the Pattern On The Trestleboard. 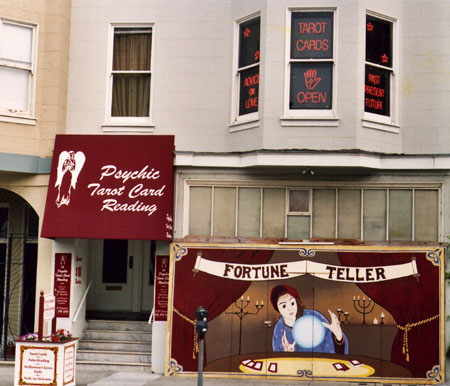 The petro-crust wilted bouquets of polyethylene wildflowers, planted like stations of the cross about her flickering tabernacle.  It jacketed shelf upon shelf of fading bound volumes bearing testament to the omnipotence of the Zodiac.  Isis Unveiled, The Neptune Effect, Fowler’s Ephemeris, Hands-On Healing: such titles, and stacks tape-labeled Palmistry, Phrenology, Chakra Balancing and Foot Reflexology spilled into one another, all but burying the latter rows of her restive congregation.

“I am guided, moment by moment, along the path of
liberation…from the exhaustless riches of its
Limitless Substance, I draw all things needful,
both spiritual and material…”

This sober recitation droned forth from a seven-square cluster of aerosol white chapel chairs with turquoise vinyl cushions.  In them shifted the evening’s disciples: small-change courtesans and drydocked merchant seamen to gamey sidewalk crapulents and trimestered belly dancers who had joined together seekings inspiration and shelter on this drizzly late-autumn night.

Croupier to the whole forlorn flock was a testy, Chenian-looking ecumenical chub in a rumpled blue duster and bandaged hornrim bifocals.  Richard Muntz kicked in visible frustration at the wobbly lectern with muddy tan Hushpuppies, his bubble cheeks blushing like brake lights as he nudged up his glasses and shepherded his following through their vows.

“Proceed now, people.  Mine is the victorious life…
I look forward with confidence to the perfect
realization of the Eternal Splendor of the
limitless light…”

“I rest my life, from day to day, upon the
sure foundation of Eternal Being… The
Kingdom of Spirit is embodied in my flesh.”

His pullus skin had begun crawling by now, with reason enough.  For lording over him, from the Malaysia-screened shadows to his left, was the Centre’s founding horozodiacal grand dame-in-residence.  “Hold a second, son…hey Dickey, the schedule, follow the schedule.  Get on with the blasted thing…”

Richard huffed, glared sorely our way, then snapped to with a slightly Germanic pounding of his gavel.  Suddenly all eyes glued in on the quaking lacquered screen.  It wasn’t just her abrupt voice, nor the dim throes of her threadbare dragon tapestries, nor the Subtle Vibration Center and Occult Body Charts tacked to black veloured partitions encasing her dour silhouette.  Rather, it was the prospect of such sheer, throaty thunder from such a frail, sullen soul.

Thornia DeWilde reigned from atop a sweeping monarch-winged throne, a massive wicker pod with stuffy brocade pillows, and alternating rainbows and intricate rosewood arches layered to the ceiling directly overhead. Her tiara proved to be an unraveling, matted Acrilan wig perched precariously on her shrinking cranium, old roadkill on a muggy delta highway

The hairpiece crept steadily up her forehead as she frowned and banged the gold band on her ring finger impatiently against her wooden side tray table, exposing her own plastered henna mop, tucked away in flat, bobby-pinned ringlets.  “That means dump the Trestleboard, Dickey, I mean now!  Can’t let up on him for a minute.  Then again, he always end up doing what I tell him to do, believe you me…”

Looking straight on at Dame Thornia was like viewing Liberty Island from choppy waters: While her wig pitched rightward, her mascared brows peaked and troughed.  Wire-rimmed trifocals dangled beneath dripping dime-store chains, supported only be her multi-ringed left ear.  Rouge accelerated wildly around her right cheek; persimmon lipstick skewed graphically to the left, lending a free-floating asymmetry to her presence.  The fox stole and aquamarine housecoat were a palate of yesterday’s Thanksgiving dinner.  Indeed, her entire cubicle seemed redolent of leftover giblets and gravy.  But I snapped crisply to attention once she spun back around and cleared her throat.

“Now then, where was I,” she asked, in her chain smoky rocksalt voice.  “Curious enough about astrology for a private reading, are you?  Say, I like a fella with auburn hair…”

Thornia’s deep, murky eyes gyrated liberally, her weary head rolled counter-clockwise on a gilled, bead-strapped neck—all so strangely inconsistent with the photo portraiture of youth and reckless beauty mounted reverently over her shoulder.  “Young man, I don’t have time to teach you astrology, and you couldn’t grasp it all even if I did.  It’s taken me a lifetime, and I know what I’m doing.  So I’m gonna give you just one bone to chew over, because like I said, it’s laying for you down the road.”

“I only want to know about Saturn, remember,” I sipped at a wax cup of complimentary Oolong tea.  “We were going to talk about Saturn…”

“OK, OK…so what do you know about it, anything,” she asked.  A wheezing cocker spaniel suddenly bellyflopped up onto her lap.  She fed Trining sugar cubes from her housecoat pocket, stroking his dull, molting fur.  “That Saturn’s the second largest planet in the solar system?  That it’s a gassy, yellowish star, molecular hydrogen mostly, 9.54 astronomical units from the sun?  No, huh?

Well how about that its equatorial diameter is nine times that of Earth, or that it has a surface temperature range of –150 to –190 degrees centigrade.  Hmph, bet you don’t even know that Galileo discovered Saturn’s rings—in 1610. Yep, there are four of them, made of ice crystals and rocks.  And the two big outer rings are split by a 2,200-mile gap called Cassini’s Division.  Why, Saturn even comes with its own moons…Titan alone is big as a…”

“Well, then just remember this,” she whispered, hunching ahead in earnest, tapping her index finger on the frayed bunting of his foot stool as Trining fled for cover.  “Saturn makes one complete revolution around the sun every 29.458 years, at an average speed of 9.64 kilometers per second.  That’s only three times in your life—and that’s if you’re luckier than most.  So your first rendezvous with the ringed one is coming sooner than you think, bub.

But what’s this to you, huh? Just consider that Saturn also takes this long to pass through all the signs of the Zodiac. Which means it takes more or less 29 years (givvertake) to return to exactly where it was the moment you were born.”

“Plus or minus some months, or so, 28 through 29—varies person to person. This isn’t an exact science, you know,” she searched about for her frazzled little spaniel.  “Now, your Saturn Return–I personally like to think of it as a rendezvous–can end up good or bad. Depends on whether a body’s really prepared to pass from childhood to adulthood.  In your case, whether you’re ready to become a man…”

Thornia rubbed at her cataracts briefly, then coughed and groaned, her Beltone earpiece soon alerting that Richard had digressed from a Trinity Schematic to some screed on why Justice wore white shoes.  “Dickey, I want you to stop that crap this instant and stay with the lesson plan,” she roared.  “You’ll do it my way or not at all!  Hmph, sometimes that hopeless twit gets to thinking he runs the place, when he’s too thick to take care of his own self .  Well, it’s my shop, and I’ll put him out with the trash heap, get me some new blood around here…”

“No, I mean you’re being busy and all,” I said, charily buttoning my blue chamois shirt pockets as I pushed back on the failing ottoman.  “I can just come back another…”

“Hold on, bub,” she grasped my knee.  “This is your life we’re talking about…maybe some pretty horrible things, at that. Then there’s the the resulting Saturnal damage to those around you.”

“What…life, what damage?  All I know these days is grad school finals.  What then?!”

“I rest my case.”  Dame Thornia heaved a weary sigh, stifled her belch, then lit a 100mm cigarillo that had been burning a hole in her duster pocket.  “Of course, ultimately Saturn passes, leaving a body to tidy up its cosmic debris field. But that’s enough free astrology for one sitting, college boy.  Cost you twenty dollars if you want to know more…”

“No scam…and no plastic, or out-of-town checks.”  Thornia nodded back into that intercosmic coma, once again summoning the wary spaniel to her stained, cratered lap. Richard recessed his semi-entranced flock on cue, shuffling dutifully over to the Centre’s front counter, carrot-celery juice in hand, tilling the latest take, with an eye keyed toward our little tête-à-tète. “But here, a special offering for a special client—it’s my very last one, but looks like you are surely going to need a talisman,” she winked, handing me a small, ceramic Saturn planet from her other duster pocket: red-orange and silver with an SR inscription. “And if you ever need anything else, feel free to give me a ring…”

“Wait a minute,” I burst, second guessing despite myself, stabbing deep into my brown denims for a rubber-banded billfold. “What need? What horrible things?!”

“Time’s up.  See you around, bub,” Dame Thornia bellowed, as I turned toward the front counter. “Round and ’round…”

“Not if I can help it,” I said, crossing the room toward her front counter.

“Help is what you’ll need come your Saturn Rendezvous.”

Time stalled, timers triggered, house lights shorted and surged.  Richard rang up another hasty twenty on the register as, against my meeker judgment, I sat back down.  Maybe this wasn’t exactly where everything got started.  And who knew whether any of it was true?  But it’s where it all began, all right—lo, so many years ago.  I’d since checked back in with Dame Thornia more often than I cared to mention, and the omens, aspects and monitions that followed have flitted in and out of my memory ever after—sure as West Nile mosquitos bedevil bedrooms on a sticky summer night.  How she managed all along, that always was a mystery to me.

Now, what about yours?