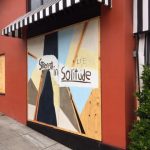 COVIDose: …Still and all, the 19’s nervous lockdown came on so suddenly, hitting home in the worst possible way. These Shelter-in-Place orders got me to seeing those little virus buggers everywhere—everything of modest comfort being overrun by creatures of creeping disease. News outlets caution dire hazards 24/7, scaring the bejeebers out of everybody—feedback looping how COVID pathogens can light anywhere and fester for hours and days on end. But NPR can hold that thought a moment. Let’s REVERT, NOW…

“But I know for a fact you must do this. You have no choice in the matter.”

“I mean, under the circumstances…”

“Under my circumstances. I have to have access, I’ll have you know. It’s in my lease, my legal right. Believe me, I’ll go to the rent control board with this!”

But then I footslogged back uphill to the house from the Marina this afternoon, happening upon the one tenant I’d recently avoided at all costs. I bit tongue, eyes down as with any chance passing, like she and I had for all intents and purposes ceased to exist within the confines of this house. Yet here she was on the very same front landing, frantically punching at her Samsung, having misplaced her keys, essentially locking herself out, unable to get a rise out of anybody else who might come to her aid, even should they be so inclined. Yet with Ms. Her Royal Testiness again rattling her lease agreement and codicils, I decided to let her into the lobby, hastily grab the master keys from my place upstairs, then let her into to her room. Whereupon she right properly slammed the door in my grill with a histrionic sweep of her everyday layered crème cape.

Nothing more was said between us; still, I began second-guessing this move, paranoia setting in. Meaning, was this her ploy, a trap? Now that she has re-established that I had key access to her’s and all units, would she concoct some ‘missing items’ scam from her room. Motive? Petty stuff alright, payback for my suspecting she OCD pilfered an old digital camera through my ajar door a month before. She had already demonstrated she could be that bitter and diabolical on a variety of fronts, which I recollected as I scuffled downhall. There I keyed in on the flapping white paper notice that had apparently been tacked to my door. Seemed my CYA chores and good neighbor practices were little more than whistling past Delphoria’s rear garden.

“Cat lady strikes again, huh? She’s been blasting that damn opera again—can’t tell who’s been screeching in there, her or the stupid tabby,” said Jennifer, peeking out her door, protein bar in hand. “Oh, did you see him yourself?”

“No, think it was that gofer of his. He tacked that notice up on your door.”

“Whatever, that dude creeps me way out,” said Jennifer, glancing up and down the hall. “You could just ask Tomarrah about him…”

“Easier said than done,” I said distractedly, gesturing toward the notice. “So you’ve already checked this out yourself?”

“Me? No, didn’t go anywhere near it,” she rolled her eyes, fixing to close her door. “What’s the good word?”

But I had no idea it would go this far, this firmly, this fast. That earlier certified notice? Apparently, it was not mistargeted; it bore no typos. Reading this new order, I shrank in through my studio door:

Notice Of Termination Of Employment. This is a notice that your employment for Foster Norguard was terminated as of August 17, 2019. Your employment at the stipulated property was pursuant to an oral agreement with Marvin Rosener, Mister Norguard’s predecessor in interest.

As an employee who was furnished accommodations as part of your compensation, you are not a “tenant” within the meaning of the local rent control law and thus are subject to eviction as “exempt” from the ordinance. Chan v. Antepenko (1988) 203 CA3d Supp. 21, 25-26.

Further, an unlawful detainer may be commenced against a licensee or terminated employee without notice. See Code of Civil Procedure Section 1161(1); Chan v. Antepenko…

You are hereby required to surrender possession of the premises and no later than September 15, 2019. If you remain in the premises following the termination of your employment, you will be lawfully removed from the premises pursuant to legal process.

Christ, legal, another with the attorneys—what was this about? Why me, for godsake, why now? I slumped onto my lumpy brown sectional sofa, clammy hands now compulsively pressing and creasing, creasing and unfolding, spindling and smoothing the notice like I hadn’t since my draft orders came aeons ago. Then started the lookarounds, at my sunny, spacious crib and all the stuff I’d accumulated in here over the years. What to do with it all, I seated, where would I go, what would I do next? Hummmm, hmmm—better to try ignore this stun grenade, as I had the earlier letter, or at least forestall such a hardball reality? Nope, not any more, no getting around this one, not with Norguard’s button-man lawyer involved.

Rip currents of denial and raging resentment coriolised about my steaming skull, even with sneaker waves of resignation and instant nostalgia lapping in. Naw, voices of this couldn’t be, this couldn’t stand battled for primacy, to where I couldn’t help but rise up and commence pacing the room. Scanning and rescanning the notice, my pupils and retinas burned with cross-eyed focus, and thoughts turned synaptically to frantic who and what nows. Person-to-person Foster Norguard—seeking clarification, working through our differences, smoothing the waters, basically pleading my case: Hah! Bloody lot of good that would do me, given our past and present.

Then what about Sedge Eisenhoff? Hell, that dick would just grill me over any concrete observable progress on the Russkie crowd. Yet couldn’t dare bring this up with anybody else in the house—who knew how much they’d be taking up the landlord’s side out of self-interest, if not outright fear? Cackling not least would be that miserable crone down the hall—who more than not triggered this all. Then what about the lawyer gal downtown? Forget that, I’d be lucky enough just to get her aboard on the Hassett case as it was.

Unseated, unsettled, uprooted, discombobulated all at once—with the clock timing out. Bottom line: I had no Twitter or Instagram following, much less a Facebook page; and what remained of my Rolodex was a dead spin at best. Such was the life of a deluded writer type, inartfully painted into a corner chapter of devoted solitary confinement. Such was this bird-brained coexistence in the stately old Delphoria.

Knock—knock, knock, knock—knock knock. Who the hell? What, they’re coming after me already, storming doors? Just like with Nigel Cox and the narco-Feds back in the doomsday. I snuck a peek through the peep hole, expecting a battering crew fixing to hammer away…wait, fuck it’s only Doyle Granger again.

“Time to take the plunge again, boss,” he said, the moment I opened my door.

“Jee-zus, how bad this time?” I asked, wondering if he’d seen the posted notice, what all he might have known about that.

“Same old shit—tits up, right to the top,” he glanced past me, into my place, eyes squinting with the afternoon brightness. “So, what have you heard?”

“You know, the commotion and everything around here lately.”

Figure of speech, his tits-up thing, although our minds did drift momentarily upstairs to room number 6. That would have been directly across the hall from Granger’s, graced by the ever presence of Clarice Watkins. A pneumatic Jersey figure from Cherry Hill, she immediately took over Delphoria’s top floor, yoga in the hallway, Cardi B and Kesha Rose on the box and buds—Victoria Secretly delicate underlayers strewn like wind-scattered supermarket circulars up and down the hall. Which was where the 4th floor common bathroom sat, beside the upper staircase and landing.

Intended for three of the four top-floor tenants, the lavatory was bright white and cleanly functional, but cramped as monthly ragtime, with a tiny utilitarian basin and shower stall instead of a tub. It did have ample shelf space, however—except that Clarice had supersaturated that bloated water closet with her towels, washcloths, Q-tips, ointments, dressings, pads, powders, shampoos, rinses, peroxide, soaps, lotions, lozenges, mouthwashes, pills, razors, bathsalts, pumices, polishes, rouge, lipsticks, mascaras, eyeliners, conditioners, perfumes, facial peels, floss, toothpaste tubes, brushes, whitening strips, flowery Kleenex, scented bun wad and who knows what else. Naturally, remnants of this stuff ended up in the bum, especially her pads and plugs. Hence the periodic need to clear the toilet line, for which I dutifully manned the plunger, dirts cheaper than a Roto-Rooter intervention.

Tight living, tighter fitting: Not surprisingly, Doyle groused about no room to quickly shit, shave and shower in there whenever he was in town, albeit with a sly, lecherous eye. While Clarice continued flexing blithely further along the floor, scantily singsonging her glee when the weird old fart across from her was long good and gone again, not to be seen for months on end. But she was free and Clearasil compared to what had gone on about room number 6 in years past.

“Commotion? How do you mean,” I dodged, holding the door firmly at the halfway open point.
“I haven’t heard anything…”

“Well, I have,” he replied, now focusing more on me, with an up and down read. “Happened to be in my room the other day when those parasites were snooping all around the building.”

“Yeah, so?” I’d wanted to ask him if he’d heard anything about Tomarrah in his liturgical barfari between Perry’s, the Mauna Loa and Balboa Cafe. But apparently there was more on the immediate agenda.

“So they were talking about dumping the place, putting it on the block—that’s why they were really scoping it, appraisal like. Heard Norguard say he feels torched by the whole SRO business, that Marvin Rosener should have never bought the joint in the first place. So he’s been thinking about cashing out, letting somebody turn it into an AirBnBnery or something…”

“Torched, he said that? Seriously?” For which his legal notices served as extinguishers?

“As a coronary,” Doyle nodded, stuffing a take-out menu in the breast pocket of his Planet Hollywood tropical shirt. “That’s why I trucked on down to the Rent Control Board straight off. They said I was 60/10, meaning I am protected, baby. Solid gold security in the ol’ pada terre, no matter who and what. How about you?”

“Uh, not so sure now…kind of betwixt, up in the air…at loose ends, all of a sudden.”

CHAPTER 11. A more critical look
at some troubling parallels tips the
balance toward provisory cooperation…