Yeah, step back, step waaaaaaay back: I remember the Dame telling me about it one time when she had settled (back) down here. She had been but a small child then, yet described the whole shebang in uncanny detail…

Sure, just look around you son, the Marina—humph, born in the wake of one Big One; still being retrofitted in the wake of another major quake—merely a slap-bang neighborhood on the up and come. Nope, real San Franciscans rewind to when there was no Marina and the District didn’t exist—where hereabouts was only a barren shoreline strip many locals called Harbor View-turned-Coney Island West, a late-1880s horse and buggy hot-spot seaside destination.

Sadly, so much upheaval had ensued since Enrico Caruso was first blown off the opera stage in April, 1906 and America’s greatest natural disaster wrought its earthshaking fiery destruction citywide. Quake refugees fled here for safety, from Fort Mason to the Presidio, by wagon, handcart and wheelbarrow—if not by foot, with whatever they could salvage on their backs. Upper Marina’s ravaged spas and amusement resort grounds were soon overrun into teeming, rough-edged shelters and tent camps. Harbor View zinc-tub hot sea baths, crab houses and bucolic gazeboed picnic gardens, having already ceded some scenic bayfront to gritty gas and forging industry, decayed further, faster—largely reverting to windblown native marshes and sand dunes.

Yet before long, San Francisco had proudly rebuilt itself out of the ruin and rubble of ’06, and it wanted to reintroduce itself to a war-bound world. Stir in a new mobilizing technomarvel called the Panama Canal, and it was time for ‘the city that knew how’ to preen and party on a global scale. So Mayor ‘Sunny Jim’ Rolph and his downtown cronies elected to lease or buy up ‘Slippery Jim’ Fair’s mostly fallow acreage and adjoining parcels at eminently bargain prices.

Civic movers and shakers proceeded to clear and dredge Harbor View Park basin, rebuild a seawall, landfill the leveled shoreline with debris from all over NorCal—in under four years fashioning a swampy tidal flat on the Queen City of the Pacific’s northern edge into ‘the greatest revelation of beauty and progress that was ever seen on this earth’*.

The Panama Pacific International Exposition opened in all its glory and grandeur on February 20, 1915—fog horns wailing, church bells pealing, Presidio garrisons firing 21-gun salutes to the likes of Governor Hiram Johnson, Secretary William Jennings Bryan, even President Woodrow Wilson, who’d sent along no less than the Liberty Bell for such a momentous occasion, pressing the official start key from Washington D.C.. Out of a drab, barren bayfront had emerged the Jewel City of Domes **, over 635 acres of integrated exhibit palaces devoted to agriculture, commerce, machinery, transportation, education, metallurgy and more: The world at its finest, some 43 states on display, configured in the shape and luster of a golden brooch with Venetian cloisonné. 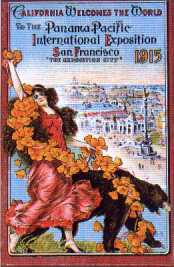 fog streams, multi-color gas torches and projected rainbow ray fanning laser-like light shows fashioned an Aurora Borealis over a magically misty bay backdrop. This was a city with nary a shadow, its perfectly symmetrical Italian spires, Byzantine portals and pavilion domes, centerpieced by the Tower of Jewels itself, rising 100 feet higher than Russian Hill or nearby Pacific Heights, its high-point 430-foot tall tiers and ledges aglow with over 100,000 sparkling mirrored nova gems hand cut in Austria and Bohemia, shimmering in the breezes.

Then there came the Fountain of Energy, Neptune’s Daughters, Mongolian Warrior statues, Pizarro on horseback, and the Arch of the Rising Sun. Umpah-umpahs and string concertos soundtracked the Palace of Transportation, rolling with futuristic Maxwells, Franklins, Loziers and Hubmobile roadsters—Eddie Rickenbacker and Barney Oldfield revving by, chasing Dario Resta in a driving rain for the Vanderbilt Motor Cup. Nearby, an eight-acre Machinery Palace, the world’s largest wooden building, featured famed aviator, Lincoln Beachy launching the first indoor aeroplane flight—while shoreward, daredevil Silvio Petirossi’s monoplane followed the ‘father of aerobatics’ belly up into the bay.

Which is not to say the Fair didn’t have an even racier side. Indeed, Stella’s sultry nude portrait proved a hot attraction in the Joy Zone’s flim-flam thrill bare arcades; a humongous topless maiden graced ‘The Biblical Creation of the World’, bare-breasted caryatids overheated the Grand Trianon boiler house. Tits-up fountains, the phallic Column of Progress and raw L’amour figure sculpture so spiced the affair that women’s’ protection committees issued warnings nationwide against the exponential lure to local to local cathouses of purely nubile girls-next-door—this being San Francisco, and all.

Wonder of uncharted wonders. Captain Sigsbee, the Dayton flood, Nations of the East archways, transcontinental telephonics, a world’s champion Belgian stallion, the hybrid ostrich farm, a double-decker Aeroscope whirring overhead, a north end Column of Progress rising from the ashes of temblor despair, mythic bowman, half-naked Lady Liberty poised scandalously atop, down to the ornately flowerful South end Gardens. The Pan-Pacific was a non-stop celebration for the ages of the varicultural modern world. Yet perhaps the Fair’s most inspiring statement of all was made in the universal language of architecture and higher, finer art. 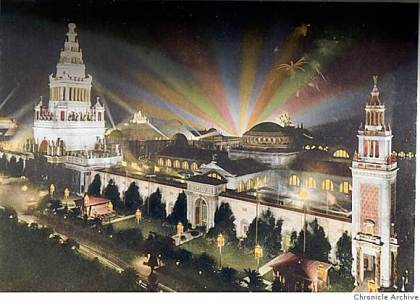 Extravaganza over: fell the passion-vined palm trees, prepare to strike the set. Impractical, economically infeasible to maintain, down crumbled the domed pavilions, tumbled the towers, whole dreamy gem of an exposition in a bulldozed flurry of dust and debris no less destructive than the very cataclysm it had served to transcend. Not least falling victim was Keen Kutter’s kitschy hardware castle—that gaudy, perpetually moving, cluttered bric-a-brac fortress of gigantic pocket knives, windmill ax blades, pruning scissors, soup spoons and anvil blacksmithery. Down came every last marvel of art, science, pyrotechnics and architecture—tumbling to the ground, sold and auctioned away, carted off to oblivion, or grinding back into landfill—not least, Calders and James Earle Frazer’s iconic statue, ‘End Of The Trail’. All done and gone, that is, save one…

Though erected on a brackish seepage-fed sump, the Palace of Fine Arts was said to be the most original and consummately aesthetic/refined capstone of the entire spectacular Fair. Bernard Maybeck’s masterstroke, this stunning structure had its roots in the Temple of the Sibyl at Tivoli no less, and became the elegant lagooned epitome of Pan-Pac’s fantastic classicism-meets-romanticism vision—Hawaiian Fairy Fleet paddle boats ferrying revelers about the reeds, mallards and bridal white swans. Still, it too was doomed to ex-Fair demolition, until city admirers like Phoebe ‘Mama’ Hearst stepped in to spare their newfound treasure, amid the sudden early ‘30s building boom of a Spanish stucco Marina Gardens District on the gridded Vanderbilt Tract—that’s right, atop this very landfill (itself of course doomed in seismic kind down the line).

Yet thus began the Palace’s afterlife as an enduring civic ornament, and an unending cycle of decay and fund-driven restoration—fleeting exhibit to permanent museum piece, plaster and baling wire to concrete and I-beam, pile-driven steel. This ground-up reconstruction effort culminated in a crosstown Summer of Love rebirth celebration in 1967—solidifying a preservation movement that has continued on to where we were today.

Namely, facing a new round of chainlink fencing as the Palace of Fine Arts was bracing for more seismic upgrades, in preparation for the next Big One…